Deep in the heart of Kitintale, one of the slums in Kampala, Uganda, lies the Kitintale Skatepark, a place that has become synonymous with talent, adrenaline, and positive vibes. Built by Mubiru, the park started life as little more than a single halfpipe. Now, more than 300 children learn to skate there and Mubiru jokes that he is the “grandfather” of the sport, “Most of the people when they hear grandpa they think of grey hair. But no, a grandfather, that is knowledge. So, for me, I am a grandfather of skateboarding in East Africa because I introduced it, nobody knew about the sport.”

Mubiru’s skateboarding journey began in 2005. While binge-watching TV, he stumbled upon legendary American skateboarder Tony Hawk. He says that he had never seen anything like this before and it inspired him to start skateboarding, “I was like, I need to know how can someone jump with a board without… ahh! I thought that maybe this is magic.”

A year later, Mubiru had a chance encounter at the mall with South African skater Shael Swart. The two quickly struck up a friendship, which would eventually lead to the construction of the Kitintale Skatepark.

Following its completion, the original halfpipe structure drew the attention of locals and quickly became a favourite pastime for children in the slum. Mubiru explains that, to start with, there were many accidents at the park, “Accidents were many because we had no protective gear, no helmets. You know, for us, we used to skate barefooted you step on the board and you have only one board. Our first skate pipe, we wrote, the word, ‘skate at your own risk’ because many guys they got injuries.”

Fifteen years later, and the skatepark has evolved into the most prominent feature in the Kitintale slum, empowering children in the community and inspiring the next generation of pro-skateboarders in Uganda. Kyomuhendo Peter, a skateboarder and coach at the park, describes why he loves the sport, “Skateboarding has like the biggest life lesson on a person, it impacts a mindset. Like, whenever you fall down you have to get back up, you don’t give up, every time you do a trick. For me, whenever I do a trick and fall down, I keep on pushing until I learn the trick. So that’s how life is.”

The children who skate at Kitintale have been able to participate in several international skating competitions in countries including South Africa, Kenya, Namibia, and Germany. Mubiru now hopes to bring more girls into the sport, and thanks to his daughters who are following in his footsteps, he has the perfect female role models, “My daughters, they are inspiring more girls to be part of skateboarding. How? When they skate, other girls say ‘Imagine, even a girl!’ So, they join them. So, my kids, they are advertising the Uganda Skateboard Union, that girls we can also do it.”

However, the high cost of importing equipment remains a major challenge to the sport. This hardship has inspired Mubiru’s latest dream, “I have a dream which is to start my own plant to manufacture skateboards. Right now, we are importing them from Europe. I want Uganda to be part of the skateboard culture, Uganda to start manufacturing their own skateboards.”

From its humble beginnings as a lone halfpipe, the skatepark has evolved into a diversified social enterprise. As well as running classes for jewellery-making, fashion, tailoring and bamboo creations, the Kitintale Skatepark has become one of the biggest dance talent hubs in the country. Mubiru speaks about offering these extracurricular activities at the skatepark, “It’s connected to the skatepark because when the kids after skating, we keep them to do other things. We teach them to do other stuff so that they can create their own things. These kids, they have their own benefits like when they are going back to school, they need books, so we sell these and then we get books and also some school fees for them.”

It’s an exciting time for skateboarders around the world, as the sport recently made its debut at the Tokyo 2020 Olympics Games. After seeing the impact that just one skateboard park can have, Mubiru tells Okpo that his dream is to construct parks across Africa, “I would love to have professional skateboarders come to Africa to see what is Africa, because people they do not know the interior of Africa. If you talk about Africa, they know adventure, you go visit lions. And what they need to come and see is not only adventures, come and see the sport which is in Africa.”

This week’s episode also meets pro-climber Peter Naituli, who is increasing opportunities for Kenyans to get involved in the climbing community. He speaks about the importance of outdoor activities to help conservation efforts, “In Kenya, we’re blessed with a lot of beautiful nature and we need to give people a reason to preserve this nature. And outdoor recreation is the go-to way, a good reason that we can preserve and look after these environments. And that is why we want to inspire people to get into outdoor recreation. One way to do that is climbing.”

My grandmother’s heart is failing, and mine is breaking - Larry Madowo

Fri Jul 30 , 2021
Credits CNN My grandmother’s heart is now failing, and mine is breaking. These were the words of CNN media personality Larry Madowo. Madowo told CNN on Wednesday that every time he sees a call from home, his heart sinks. “I always fear that they’re ringing to say that my grandmother […] 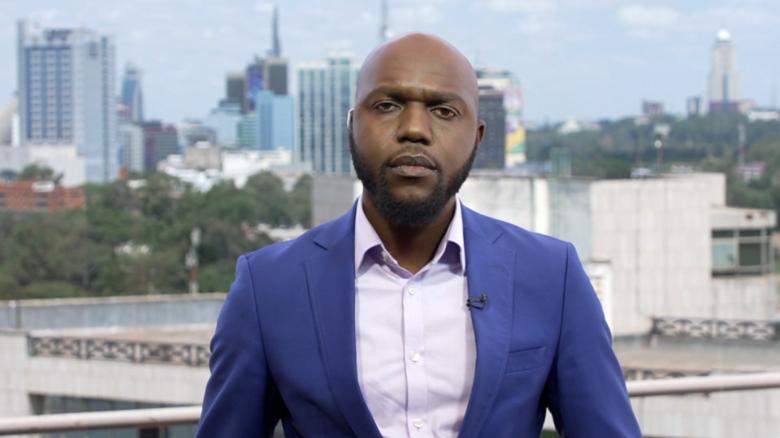